DETROIT, MI – Prosecutorial elections, voter ID laws, and disproportionate mass incarceration rates of Black and Brown individuals have raised awareness in local and national communities – particularly during this mid-election year. As a result, two national organizations dedicated to movement building and community organizing for racial justice –Advancement Project and Faith in Action – are partnering to host a reception Thursday, August 2, 2018 at 6 p.m., as part of the annual National Association of Black Journalists Convention and Career Fair located at the Detroit Marriott at the Renaissance Center. 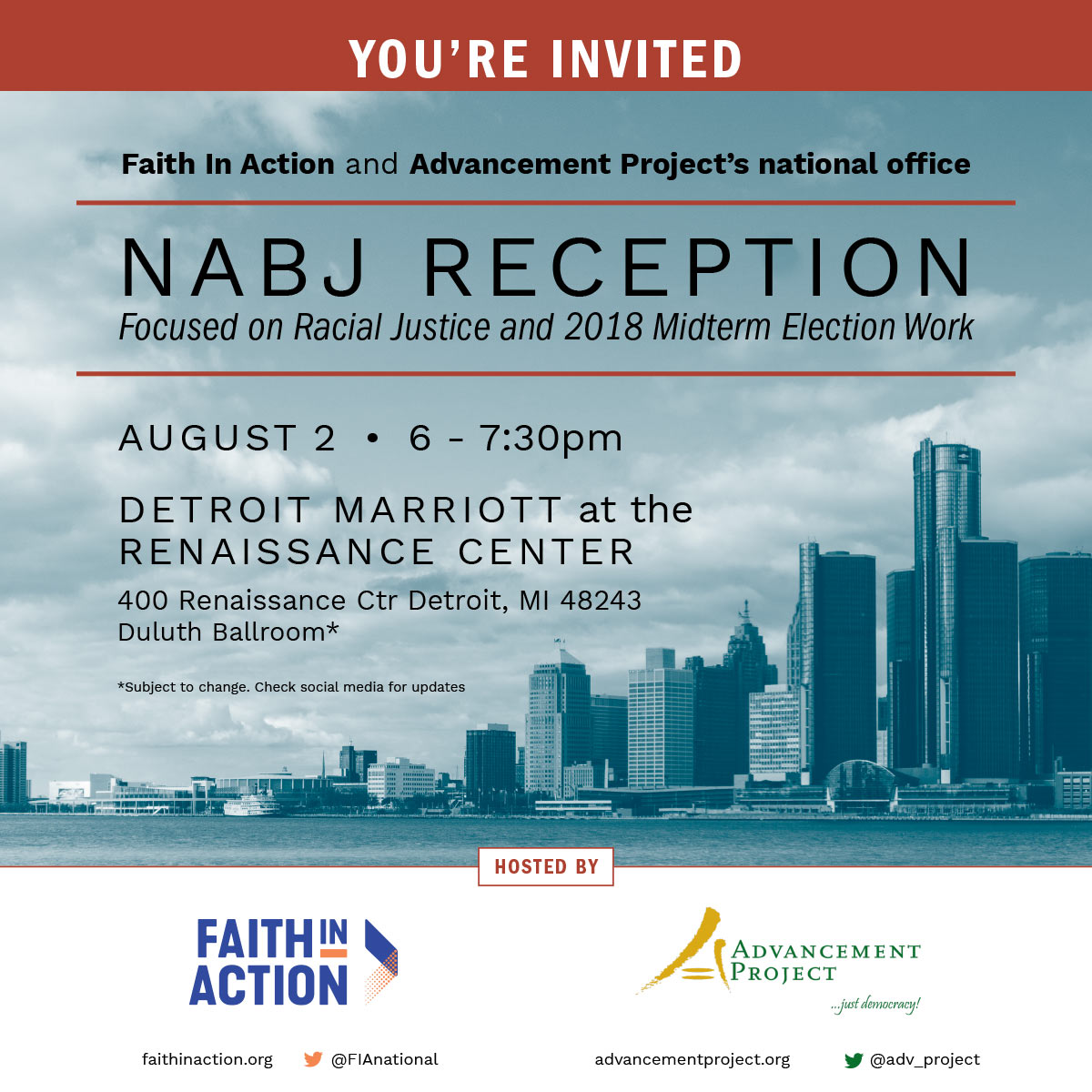 “The mission of NABJ – to educate, unite, and inform journalists of color about the issues facing communities and the best ways to inform the public – is perfectly aligned with the work of Faith In Action,” said Jennifer Farmer, Managing Director for Communications at Faith In Action. “We are here to not only share our work of rallying against the unjust policies and tension that has resulted from our current political climate, but to also find new and innovative ways to tell our stories. Ours is a fight that will not cease any time soon, and we need as many allies as possible.”

“It’s appropriate that we’re here in Detroit for several reasons. We are approaching the fourth anniversary of the killing of Mike Brown, mid-term elections are around the corner and there continues to be racial justice challenges right here in Detroit that we’re laser focused on,” said Jeralyn Cave, Advancement Project’s national office senior communications associate. These are all issues that are pressing – racial justice issues that require the attention of the community at large. We’re here to meet with journalists who want to shine a light on these issues in a meaningful way, and we are also here to continue collaboration with our partners on the ground.”

The reception will allow NABJ attendees to learn more about the work of each organization and hone in on the importance of elections, including prosecutorial elections. The reception begins at 6 p.m. in the Duluth Ballroom at the Marriott at the Renaissance Center located in Detroit at 400 Renaissance Dr W. To RSVP using Facebook, click here.

The National Association of Black Journalists (NABJ) Convention and Career Fair brings together a host of journalists of color from around the country committed to telling the stories of underserved communities, in addition to bringing to life local and national stories that are impactful and relevant to a wide audience. Each year, NABJ conventions hone in on timely issues including criminal justice reform, presidential elections and voting rights. National influencers that have appeared include then-Senator Barack Obama, former Secretary of State Hillary Clinton, children’s advocate Marian Wright Edelman and White House journalist April Ryan.

While in the city, the two organizations are also interested in speaking with journalists – particularly those in the Detroit area – to talk about local initiatives, campaigns and how their work impacts national efforts surrounding policy and justice reform. Media interested in interviewing both organizations can contact Jeralyn Cave at jcave@advancementproject.org or Erin Williams at ewilliams@faithinaction.org.

Faith in Action, formerly known as PICO National Network, is the largest grassroots, faith-based organizing network in the United States. The nonpartisan organization works with 1,000 religious congregations in more than 200 cities and towns through its 45 local and state federations. For more information visit www.faithinaction.org.
Advancement Project is a multi-racial civil rights organization. Founded by a team of veteran civil rights lawyers in 1999, Advancement Project was created to develop and inspire community-based solutions based on the same high-quality legal analysis and public education campaigns that produced the landmark civil rights victories of earlier eras.

Get Media Updates and stay informed